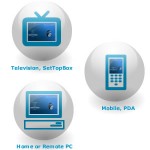 Web TV has come to stay. Internet TV is an industry with great potential. A time is coming and has now arrived when a lot of internet users will be used to the internet so much that they would prefer to watch their TV on the go. Many internet consumers are already enjoying internet in countries with high internet bandwidth.Countries like Japan and the US have enjoyed internet TV for some time now. But I believe that internet TV is yet to hit mainstream. Sites like Youtube, Vimeo and Ustream have won the hearts of many already,even though they provide just video streaming services. Startups that offer real time TV or breaking news as it happens will go on to capture large traffic.

Web TV service in a niche industry will still make it if the content is right. 2010 will see a lot of disruptions and internet TV will not be left out. The target should be web TV on smart phones.