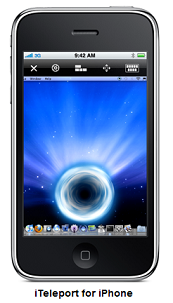 This is the second post in the bootstrapped series. Github was the first. I will be bringing you top startups that were bootstrapped from the beginning. If you know of a startup that was bootstrapped with impressive results, let me know. Today I am featuring iTeleport.

iTeleport is an iPhone/iPad app for controlling your computer remotely from anywhere in the world.iTeleport has downloadable versions for both Mac and Windows users.
In an interview with Vishal Kapur,he stated that :

It all started in Feb 2008, when Jahanzeb was in Pakistan doing his PhD research on voice applications for information access by low-literate users. J’s story:

In my spare time, I decided to tinker with my iPhone — there was no SDK at that time, so this was all jailbreak-based tinkering. I initially wanted to simply make an app that would allow the iPhone’s touchscreen to be used like a touchpad. Luckily, there was an open source VNC client called VNSea by Chris Flit and Glenn Kreisel, which was a great proof-of-concept app, and I decided to start with that.

What’s interesting to note is that I didn’t spend any money on any of this — beyond what I already had. I had a computer, an Internet connection, an iPhone, and a digital camera. Of course, I also had an education, and was a PhD student at Carnegie Mellon University.