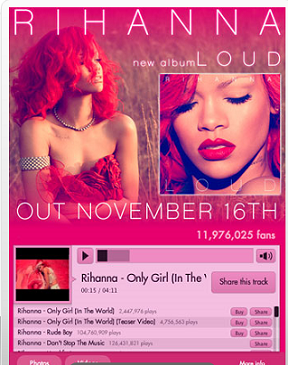 RootMusic helps musicians Make the Move to BandPage on Facebook, creating the first overall solution for musicians on Facebook. BandPage is a platform where musicians can share music, videos, photos, tour dates and Twitter feed with their fans on Facebook on a clean, easy to use page. With BandPage Plus, musicians can fully customize their fan page to create a fully branded experience for their fans.

RootMusic has announced that it has closed a $2.3 million Series A round led by Mohr Davidow. The company will use the financing to grow their team and expand their current product offerings to be the solution for music on Facebook. Larry Marcus, an early investor in both Pandora and SoundHound, is also an angel investor in RootMusic.

With 12.7 million monthly active users, BandPage is one of the most popular entertainment and music apps on Facebook and the 17th largest overall app. BandPage is gradually becoming the answer for music on Facebook. It has already received 32,496 likes on facebook.

Artists like Rihanna, Katy Perry and Grateful Dead, as well as 60,000 local, regional and national musicians around the world are now using BandPage. It allows them to represent themselves professionally on the largest social network in the world.

“Musicians have realized that all their fans are on Facebook; it’s simply where the music community needs to have a strong presence. So we wanted to help find that solution, and we have done so with BandPage, all while getting positive feedback from musicians around the world, local to national acts,” said J Sider, CEO of RootMusic.

# Sign in with your existing Facebook account
# Customize your page with an editor
# Fans can listen to your tunes while they browse your photos, videos, and tour dates

# Customize font and color settings
# Add a unique banner to grab attention
# For the designers:There are tools for adding custom background images