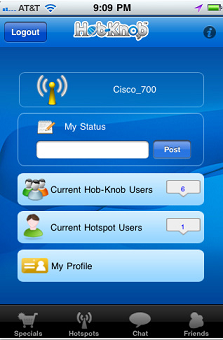 What this means is that users will be able to connect with each other just as they would on Facebook or other social networking sites, simply by being near each other on their Smartphone’s over Hob-Knobs Wi-Fi direct virtual network. Example , walk into a shopping mall with a Wi-Fi system and other Hob-Knobbers that are also in the mall simply pop-up on your iPhone. You will automatically know if your best friend, a business colleague or even your mother happens to be nearby.

Melissa Sabarese, Hob-Knob’s President stated that , “This is an application of opportunity, defining and carving out a space in the real world which previously was left up to chance encounters. Now what all Hob-Knobbers will know, and others will soon find out, is that we won’t miss our friends and family at the same place and that old saying, hey we were there too, is a thing of the past.”

Hob-Knob is set to release a new version (1.0121) of its iPhone app soon, which is set to ease use with network detection of the Wi-Fi Hotspot rather than manual entry. Hob-Knob has also launched an Android version 1.0 which can also be downloaded via the Google Apps Marketplace.