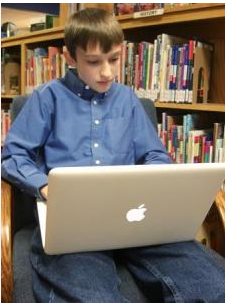 Eighth-grader Robert Nay, who also happens to be a young musical prodigy — he plays piano, trumpet and mandolin — said he was inspired by his enthusiasm for electronic games in general and his interest in tinkering with computers.

“I just wanted to make an iPhone app. I thought it would be cool. And I wanted to see if I could do it,” Robert said in an interview with Reuters. “I played games that were similar to it. I just took what I liked from different games, and, like, add my own stuff.”

“Bubble Ball” was downloaded 1 million times in its first two weeks of release from Apple’s iTunes website and has since surpassed the 2-million mark, replacing “Angry Birds” as the site’s most popular free app.

The motive is to get a ball rolling from point A to point B — you will not put your phone down until you send the ball to the finish line.

He launched his first website in the third grade, and has earned a reputation as a student techie who is routinely called upon to help teachers with computer problems.