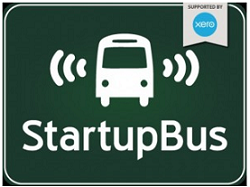 “ StartupBus is a resource to help future entrepreneurs,” explains StartupBus founder Elias Bizannes , who also believes the six-city effort will help raise the profile of less recognized technology hubs in the United States.

Out of more than one thousand applicants from six cities — Cleveland, San Francisco, Chicago, Silicon Valley, New York City and Miami — 150 were chosen to take the three-day ride on six buses, one departing from each city, to SXSW. Their mission: to form teams and build and launch a startup before reaching Austin.

The six different busses carried 38 teams that successfully completed the challenge. The following teams have been chosen to compete as finalists in front of panel of judges during the grand finale today at SXSW.

Other companies on the buses have been offered investment already and various investors are interested in companies (and individual entrepreneurs).