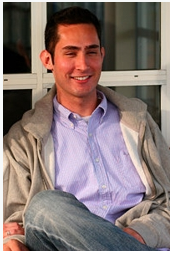 # Kevin is the CEO of Burbn, inc. – the company that makes the popular iPhone app Instagram
# Instagram is a photo sharing application for the iPhone. It allows you to quickly take pictures, apply a filter, and share it on the service or with a number of other services.
# Instagram took three months to reach its first million users, and a little more than a month after that to post its second million.
# He founded Burbn, an HTML5-based location sharing service
# Product Manager at Nextstop.com-2009
# Worked as an Associate Product Marketing Manager and Corporate Development Associate at Google,2006/2008
# Graduated first in department of Management Science and Engineering majors at Stanford University-2006
# Worked as a technical and business intern for the summer through the Mayfield Fellows Program at Stanford. Made the Odeo Widget and otherwise caused trouble-2005
# In an interview granted to fast company, Kevin Systrom said:

“When you’re introducing a mobile app, you look around and say, we could be doing 15 different things, but how do we communicate to someone why they would want to download and even sign up for this thing?” Systrom says. “In the mobile context, you need to explain what you do in 30 seconds or less because people move on to the next shiny object. There are so many apps and people are vying for your attention on the go. It’s the one context in which you’ve got lots and lots of other stuff going on. You’re not sitting in front of a computer; you’re at a bus stop or in a meeting.”