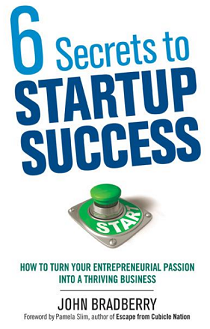 Everyone knows that passion is an essential ingredient of being a successful entrepreneur. But John Bradberry in his book talks about the pitfalls of passion or what he calls the passion trap.

The passion trap is a destructive pattern of beliefs and behaviors that occur when someone falls in love with a business concept. Passionate founders can become emotionally attached to their idea – whether it’s a pet product, a cool technology, a napkin sketch or a heartfelt cause.

This attachment causes otherwise talented, intelligent founders to make critical miscalculations and missteps—mistakes such as greatly over-estimating customer demand, severely underestimating what the venture will cost, committing too much capital to unproven concepts, or stubbornly sticking with a failing strategy until it’s too late to recover.

Here are the six most common dangers he found in working with early-stage businesses: This was taken from
John Bradberry’s book: 6 Secrets to Startup Success: How to Turn Your Entrepreneurial Passion into a Thriving Business

(1) Founder misalignment: I often see a poor fit between the founder’s skills and what the new venture requires. More often than not, startup founders fail to honestly assess how well their capabilities and motivations match up with what it will take to successfully launch their idea. They end up floundering in an ill-suited role, and the idea doesn’t get the right mix of talent around it to drive success.

(2) Missing the market: Somewhere out there in the cosmos is a massive graveyard of “great” business ideas. One of the most common by-products of entrepreneurial passion is the founder’s assumption – even certainty – that customer demand is high when, in fact, little or none exists. I spend a lot of time with new founders helping them orient their venture to the marketplace. We adhere to a simple principle: an idea isn’t great until the market says it is.

(3) Rose-colored planning (or none at all): More often than not, strong belief in an idea leads to overly rosy projections on the part of the founding team. It’s very typical – even on the part of seasoned entrepreneurs – to over-estimate early sales and underestimate costs and timelines. This leads to cash crises that consume and distract founders at the worst possible moment.

(4) Unforgiving strategies: Over-confident founders sometimes put the bulk of their resources into a single business strategy, essentially putting all of their eggs in one basket, rather than preserving flexibility to experiment and iterating their way to profitability.

(5) Reality distortion: In the book, I cite examples of how founding teams get trapped inside a “feel-good bubble,” where bad news is avoided or glossed over, and tough issues are rarely tackled.  Everyone’s drinking the same Kool-Aid, even as the venture is heading toward the edge of a cliff.

(6) Evaporating runway: Some or all of the above dangers can lead to a rude awakening for founders who are caught in the passion trap.  What was assumed to be a lengthy startup “runway” evaporates quickly as the venture runs out of cash and time.