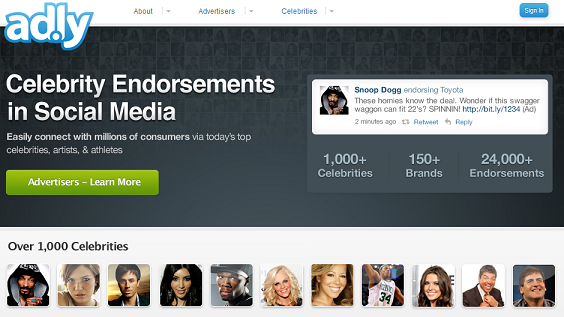 Ad.ly is an in-stream advertising platform that intelligently connects brand with influencers that publish content in streams like Twitter, MySpace, Facebook, and more. More than 1,000 of the top celebrities in social media work with Ad.ly to endorse brands, products and services to their fans.

Best Buy, Microsoft, American Airlines, NBC and Sony are among the 150 major brand advertisers that have worked with the company on more than 24,000 campaigns.

Ad.ly is backed by $6 million in venture capital and was founded by 24-year-old Sean Rad, a serial entrepreneur. The company is diversifying into other social media sites.

It recently began offering what it calls a celebrity bundle, in which brand promotions appear not just in celebrities’ Twitter streams but also on their fan pages and in display ads on Facebook.