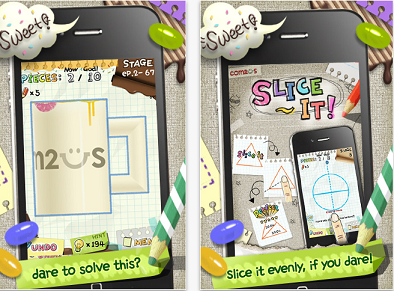 Com2uS has announced that Slice It! has hit over 10 million downloads! The slicing-action puzzle game has been a success for Com2uS since its release 6 months ago.

Game concept:
slice the shape on-screen with the correct number of lines and advance to the next puzzle. As the game progresses, the shapes become harder to dissect into equal pieces. With candy-colored graphics, a casual, notebook-style art style, and tons of levels, Com2uS was sure they had a casual game that would appeal to the pick up and play gamers of the iOS world.

1.2 million of the 10 million Slice It! iOS users bought the paid version, and 3.3 million went with the free version. Com2uS is, nevertheless, excited by the numbers brought in last week.

What was surprising was how well the game translated to the Android market as well. Of those 10 million downloads, 5.5 million are free Android versions of Slice It!. “What this says to us,” says Don Lim, General Manager of Com2uS stateside, “is that Android users are now starting to demand similar content as seen on the App Store, but given the timing of the two markets’ rises, they are already acclimated to free games.”