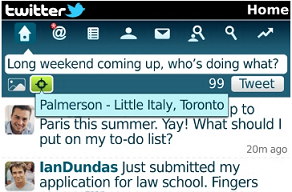 Twitter now has an app for BlackBerry smartphones. v1.1 is officially out of beta and will be available in BlackBerry App World today. The app has been in beta for six weeks, being tested by users in the BlackBerry Beta Zone. The new release includes many new features, such as the ability to add locations to tweets, and Push @mentions.

Features
Tweet Location
By enabling this feature, you can pinpoint your location in a neighborhood and include it your Tweets. To try out this feature, complete the following steps:

Open Twitter for BlackBerry smartphones v1.1
Press the Menu key and select Options
Enable Add Location To Tweet and save your changes

Other new features include Push @Mentions and #Topic Autocomplete.