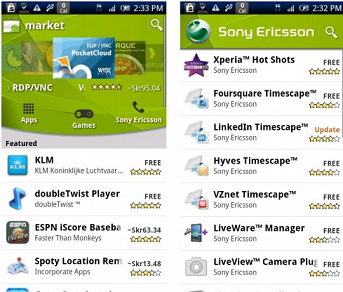 Sony Ericsson has announced a new dedicated channel in the Android Market where they can show off apps they’ve made as well as promote apps from partners.

Sony Ericsson is expected to offer official apps including Timescape plugins, compatible apps and games for its handsets. The channel will deliver exclusive titles but also allow developers to promote their apps on the Android Market.

In a statement issued on Sony Ericsson’s blog, Rikard Skogberg said that the company will use the channel for many things, as a starting point this is their plan:

– Provide recommendations to help you find the best games & apps that enhance your Sony Ericsson ‘most entertaining’ experience.
– Provide a way to easily find original apps from Sony Ericsson such as Timescape plugins etc.
– From time to time offer exclusive games & apps only available in this channel.
– Help our developer partners promote their apps & games giving them a highlighted market space to our consumers.