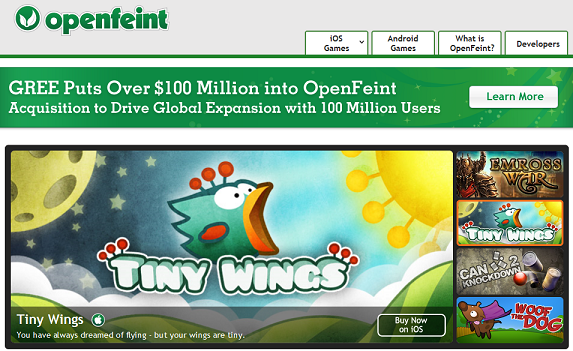 Burlingame-based OpenFeint, the developer of mobile games for the Apple iPhone and Android, has been acquired by Japanese social gaming firm GREE. OpenFeint said that GREE has acquired OpenFeint for $104M, and will also be providing additional capital for growth of the company.

OpenFeint, which was formerly known as Aurora Feint, had raised funding from DeNA, Intel Capital, and The9 Limited.

Gree has more than 25 million users and a market value of $3 billion in Japan, where it operates a social mobile game platform that lets users buy games, socialize and interact with all sorts of content.

“This acquisition further emphasizes Gree’s commitment to providing the first and best global gaming ecosystem, with both the developer and consumer in mind,” says Naoki Aoyagi, CEO of Gree International, the subsidiary that recently opened an office in San Francisco.

OpenFeint has more than 5,000 games using its platform, and those games have more than 75 million users across iOS (iPhone, iPod Touch, and iPad) and Android devices.