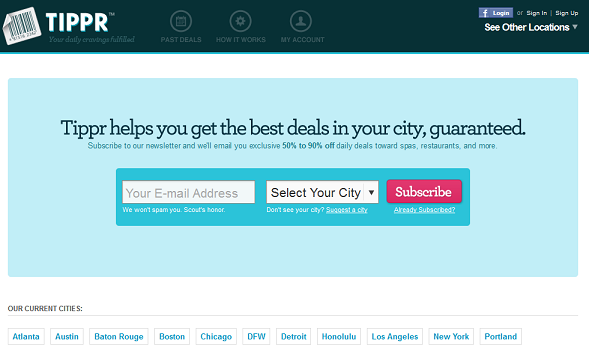 Tippr, a provider of white-label technology and services for group-buying, has announced its participation in Facebook Deals, which allows people to easily discover, buy, discuss and plan activities with friends in the first five test cities where Deals will be available; Atlanta, Austin, Dallas, San Diego and San Francisco. With this launch, Facebook users in the five test cities now have access to deals that are provided by external deal sites such as Tippr.com.

Merchants featured on Tippr.com and the daily deal sites operating on the PoweredByTippr™ platform now have the opportunity to easily expand their reach into the world’s largest social network. By teaming up with Facebook Deals, the PoweredByTippr platform provides additional visibility for merchants and allows them to share their deals with a socially active and influential group of consumers.

The PoweredByTippr platform will provide a streamlined approach for publishers to showcase daily deals to Facebook’s more than 500 million users.