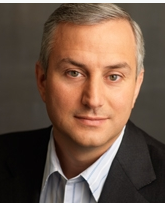 Mark Suster is a 2x entrepreneur who has gone to the Dark Side of VC. He joined GRP Partners in 2007 as a General Partner after selling his company to Salesforce.com. He focuses on early-stage technology companies.
# Mark received a BA in Economics from the University of California, San Diego, and an MBA from the University of Chicago.
# Mark was formerly the Vice President at salesforce.com. Founder & CEO at Koral (Acquired by Salesforce.com). Founder & CEO at BuildOnline (acquired by The Sword Group)
# GRP Partners is a venture capital firm that backed both of his previous start-ups.
# Mark founded Launchpad LA, a program designed to help mentor LA’s most promising first-time startup CEO’s.
# Current Investments / Boards: RingRevenue, GumGum, Adly, Burstly, Pose & TextPlus
# Angel investor in: Affordit, EagleCrest Energy, EcoMom, ExpenseCloud, Gendai Games, LaughStub and several others (including a company that is the global patent holder in resealable aluminum cans)
# Marks’ thoughts and insight on starting up: