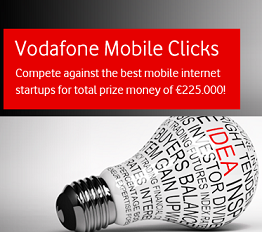 Vodafone Mobile Clicks is an international contest to identify and develop the best, most innovative mobile internet start-ups.

This year’s Vodafone Mobile Clicks is open to seven markets. Any start-up in Germany, the Netherlands, Portugal, the Republic of Ireland, Spain, Turkey or the United Kingdom that has a mobile site, service or application can compete for the €225,000 prize fund.

Vodafone Mobile Clicks 2011 is open to all mobile-related start-up companies, businesses, institutions and all other organisations in the joining countries of this years’ competition.

Announced at The Next Web Conference in Amsterdam,

Apply Now, the closing date for entries is midnight CET on 12th June, 2011.

The winner from the seven finalists will be announced in a live final at this year’s PICNIC event in Amsterdam on 16 September 2011. Ahead of the presentations, members of the public are invited to cast their vote for the winner of Mobile Clicks 2011.