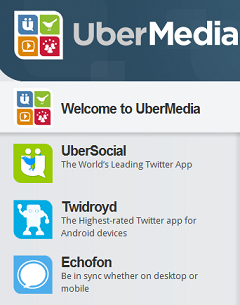 UberMedia, an independent provider of applications for reading and posting to Twitter and other social media platforms, announced today that Burda Digital through DLD Ventures has invested $5.6 million into the company in a new round of financing.

Burda Digital is one of the leading European Internet companies with investments in over 50 digital media companies in Germany, Europe and overseas with revenues of over $900 million, including Tomorrow FOCUS AG, Xing AG, Etsy and Glam Inc. DLD Ventures is the international investment arm of Burda Digital. The investment will be used to further the growth of UberMedia’s user base both in the U.S. and internationally.

UberMedia’s applications user base has grown from startup to more than 5,000,000 users in over a year. Users of the company’s popular Twitter apps – UberSocial, Echofon, Twidroyd and others – currently Tweet more than 200 times per second, representing approximately 13% of all traffic on the Twitter platform.

“We are in the midst of a tectonic shift toward social media by users all over the world, and the power of referral and information from people you trust is staggering,” said Bill Gross, founder and CEO of UberMedia. “UberMedia’s goal is to drive innovation in the social media experience so that it becomes ever more engaging, relevant, and useful.”