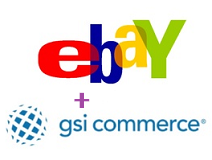 eBay Inc. today announced it has completed its previously announced acquisition of GSI Commerce, Inc. (Nasdaq:GSIC), a leading provider of ecommerce and interactive marketing services. The stockholders of GSI approved the adoption of the merger agreement with eBay at the special meeting of stockholders held on June 17th and the merger became effective later that day.

GSI Commerce® enables ecommerce, multichannel retailing and digital marketing for global enterprises in the U.S. and internationally. GSI’s ecommerce services, which include technology, order management, payment processing, fulfillment and customer care, are available on a modular basis or as part of an integrated solution.

GSI Commerce will operate as a separate business unit led by Chris Saridakis as its newly appointed president. Saridakis will report to eBay Inc. CEO and President John Donahoe.