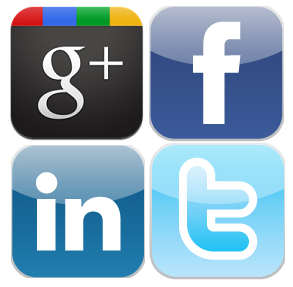 A social network is a social structure made up of individuals (or organizations) called “nodes”, which are tied (connected) by one or more specific types of interdependency, such as friendship, kinship, common interest, financial exchange, dislike, sexual relationships, or relationships of beliefs, knowledge or prestige.

A social networking service is an online service, platform, or site that focuses on building and reflecting of social networks or social relations among people. As the increase in popularity of social networking is on a constant rise, new uses for the technology are constantly being observed. Facebook, LinkedIn, Twitter and the new fastest growing network-Google+ are innovating and growing at different paces with the common goal to attract internet users to share experiences on their platforms.

Social networking sites share some conventional features. Most often, individual users are encouraged to create profiles containing various information about themselves.Facebook, LinkedIn, Twitter and Google+ have different ways of aggregating user information. Most internet users have have at least two profiles on one of these platforms. But the most crucial for these nations is get you to become an active member.That is the magic that they have been striving for every day.

At the forefront of emerging trends in social networking sites is the concept of “real-time web” and “location based.” Real time allows users to contribute content, which is then broadcasted as it is being uploaded – the concept is analogous to live radio and television broadcasts. All four nations(Facebook.LinkedIn.Twitter.Google+) have a concept of the real-time web.The real difference for me is the user experience. If a user feels safe and secure on the platform, they will not hesitate to trust the network with their information or data.

One popular use for these new technologies is social networking between businesses. Companies have found that social networking sites such as Facebook Twitter are great ways to build their brand image. LinkedIn was built with the goal to attract just professionals.And they have succeeded at that. Brands have taken advantage of what these platforms offer and have created pages just to promote products and services. Google+, the new social technology will begin to test its service for businesses soon.

According to Jody Nimetz, author of Marketing Jive, there are five major uses for businesses and social media: to create brand awareness, as an online reputation management tool, for recruiting, to learn about new technologies and competitors, and as a lead generation tool to intercept potential prospects. These companies are able to drive traffic to their own online sites while encouraging their consumers and clients to have discussions on how to improve or change products or services.

What we will witness in the coming years is a huge battle for survival and growth of the various social platforms. Myspace has suffered in the fight for active users and new user base. With the introduction of Google+ the space will be very competitive in the coming years. Facebook has partnered with Skype for video chat purpose. Google+ hangout promises to be interesting.LinkedIn has gone public. Twitter has recently created a developer platform and its gearing up for ads. The future will be in the interest of users.YOU will benefit from this healthy competition.