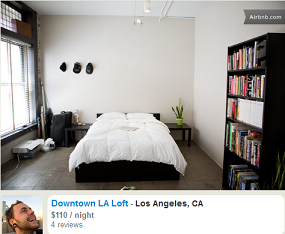 Airbnb, a marketplace that lets anyone discover and book unique spaces from people around the world, today announced that it has received $112 million in Series B financing from Andreessen Horowitz, DST Global, and General Catalyst, bringing the company’s total funding to $119.8 million.

The company intends to use the capital to fuel growth, accelerate the hiring of a world-class team and strengthen the Airbnb community at the local level.

Airbnb joins the ranks of culturally impactful companies in the Andreessen Horowitz and DST Global portfolio, including Facebook, Twitter, Zynga, and Groupon, along with innovative brands such as Kayak and Brightcove, which are backed by General Catalyst.

“We’re thrilled to have led this investment round in Airbnb. The company is defining a completely new category in e-commerce – a marketplace for all kinds of spaces, from homes and apartments to tree houses and yachts,” said Jeff Jordan, general partner, Andreessen Horowitz.

“Today is a watershed moment – both for Airbnb as a company and for our community – that will enable us to touch new markets and expand our vision to make the world’s most interesting and inspiring places accessible to our users.” said Brian Chesky, co-founder and CEO of Airbnb.