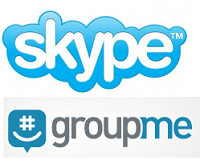 Skype today announced it has entered into a definitive agreement to acquireGroupMe -a group messaging and conference calling service that lets you stay in touch with groups of people via mobile phones. It’s a free service that allows users to create and manage groups(create SMS-based chatrooms).

Skype CEO Tony Bates says that he’s been talking to the company for a few months, at about the same time Skype was in negotiations to be acquired by Microsoft. Skype will keep GroupMe as a standalone brand, Bates says, and look for integration points over time. “The group messaging space in general is one of the most important markets for Skype,” he told Michael Arrington via a Skype video call earlier today. He added: “GroupMe creates a very sticky instant feeling. Like Skype, it is an everyday interactive form of communication. Skype’s goal is to get to 1 billion users. Mobile is the place to do that.”

“There is a natural affinity between Skype and GroupMe and our goal is to continue developing tools that make it easier for people to communicate, share, and stay in touch with their close and important ties,” said Jared Hecht, GroupMe’s Co-Founder. “Integrating GroupMe into the Skype experience is an amazing opportunity for us and accelerates the execution of our vision tenfold,” added Steve Martocci, GroupMe’s Co-Founder.

GroupMe, which has twenty employees, will remain in New York. Terms of the deal has not yet been disclosed. GroupMe is a New York-based and was founded in 2010 at the TechCrunch Disrupt Hackathon.