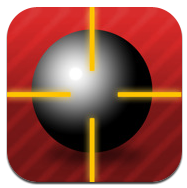 13thlab has used the NASA-invented Simultaneous Localization and Mapping (SLAM) technology to build real-time 3D maps of the environment as you move the iPad’s camera around. This is only possible with the iPad2 dual core A5 CPU.

The objective of Ball Invasion is to shoot malicious and cunning balls hiding in the real world, visible only through your iPad2’s camera. Unlike other Augmented Reality games, Ball Invasion doesn’t require printed or known markers, but instead tracks the environment around you.

“Hopefully, this will spur a lot more innovation in computer vision,” Ivmark says. “We strongly believe that as computer vision and artificial intelligence evolve the camera will take over from GPS as the device’s most important sensor to understand, interpret and navigate the world.”

13th Lab is a Swedish company trying to turn Computer Vision into a platform for the developer community. Ball Invasion is the first application based on this platform.