Samsung Electronics said on Monday it would launch a mobile instant messaging tool in its latest push to attract more consumers to its handsets and challenge rivals such as Apple and BlackBerry maker Research in Motion. 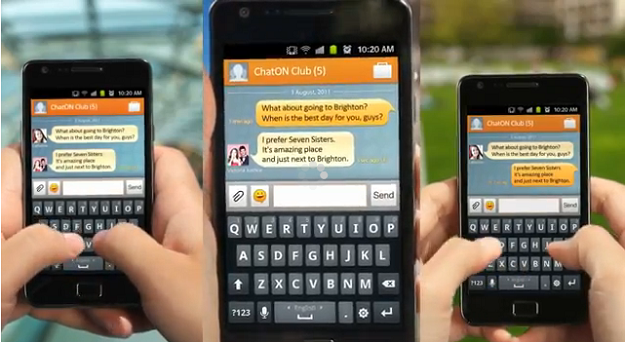 The new service-ChatON will be available from October and preinstalled in Samsung’s feature phones as well as smartphones running on its own bada operating system and Google’s Android software, it said.

Ch@tOn provides two options for users depending on the type of phone they are using. A basic functionality option is available for feature phone users who prefer simple and easy usage, allowing users to share text, pictures and calendars from an easy-to-access client.

Samsung told Dow Jones Newswires: ChatON will be embedded in all devices running on major platforms, including Bada, Android, BlackBerry, (Apple’s) iOS, as well as in other mobile devices, including tablet and (regular) phones.

ChatON will be available in more than 120 countries supporting up to 62 languages and will be work on almost every device from feature phones to smartphones. A PC/Tablet client is also in works and will be shown at IFA.