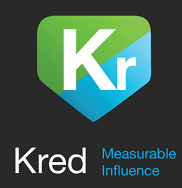 Klout released in 2009, has become a prominent name in the business of social media measurement. Klout allows users to track the impact of their opinions, links and recommendations across your social graph. Data is collected about the content users create, how people interact with that content and the size and composition of their networks. Klout identifies influencers and provides tools for influencers to monitor their influence.

PeopleBrowsr has introduced Kred, a new way to measure a user’s online influence. Kred seeks to improve on the idea of measuring social media influence by focusing more on interactions within and between smaller social groups, rather than measuring everyone — from celebrities on down to the unwashed masses — on a single absolute scale.

Peoplebrowsr CEO Jodee Rich explains to Ad Age: “Kred gives a dual score for influence and outreach rather than a single overall network score. Influence, scored on a 1,000-point scale, measures the ability to inspire action or influence others in the form of retweets, replies or new follows. Outreach increases every time a person initiates conversations, interacts with others or spreads their content.”