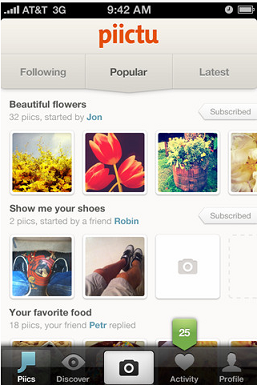 Piictu wants to make mobile photo-sharing engaging hence the creating of an iPhone app for picture conversations. In other words, Piictu is an influence-based photo gaming tool and community.

“We believe that the ease of taking and sharing a picture today changes the way people use photographs,” Piictu co-founder Noah Slimak says. “In the past, photos were more objects of memory, trying to preserve a moment for posterity. Today, photos are used more as objects of interaction, serving their purpose as part of a checkin, status update or step in a scavenger hunt. Piictu uses pictures purely as a method of interaction, transmitting a message as part of a story, game or conversation.”

Create photo contests, compete with friends and strangers, ask questions, or start a conversation through piics. No rules, it’s up to your imagination.