If you have large numbers of followers on Twitter, it’s obvious your account is worth a lot to most brands, and they will pay you to tweet their products to your followers-there are apps for that. Well it turns out your Twitter account can also be treated as stocks. Russian Twistock treats Twitter users like stocks that can be bought and sold. Launched in September, Twistock provides Twitter users with an opportunity to monetize their social influence.

“Twistock provides Twitter users with an opportunity to monetize their social influence,” explained project co-founder Alexey Giyazov in an exchange with East-West Digital News. “It also offers a chance to get closer to the ones you admire: anyone can own Justin Bieber stocks, or even acquire a controlling stake of Barack Obama.”

Twistock is а simulator of trade exchange where you can invest in Twitter accounts. By buying and selling their stocks, you can earn virtual money and then spend them on real goods in Twistock Store.

Twistock web-robots count stock value of each Twitter account. This value depends on the social influence of it.

After the first login, each new user receives the amount of virtual money one deserves. This amount is equal to the value of his 100 personal stocks. If a user has great social influence,he gets a lot of virtual currency possible to spend in Twistock Store immediately. If a user is not so popular, he can earn virtual money by buying and selling stocks of other Twitter accounts. Price of stocks also depends on the transactions of buying and selling: when buying a stock price increases, while selling a stock – falls. 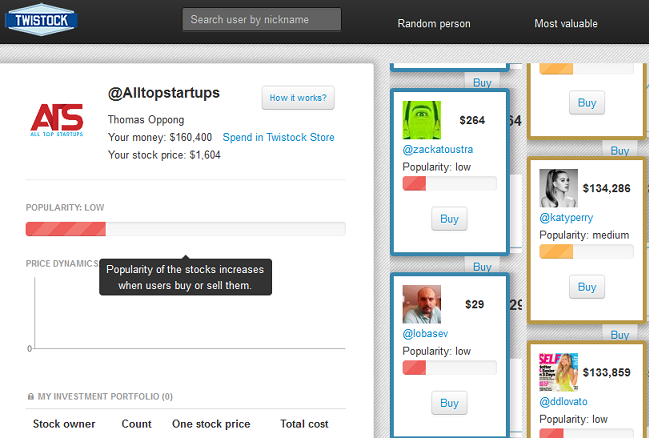