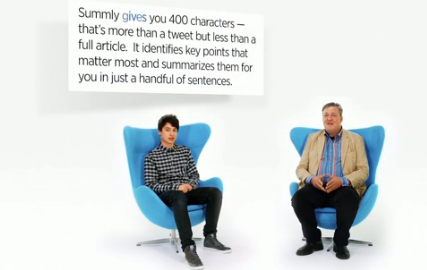 Yahoo has acquired Summly, the mobile news reader app founded by a 17 years young British entrepreneur. Yahoo said it plans to close down the actual app and use the algorithmic summation technology that  Nick D’Aloisio built with a small team of five.  The price was not disclosed,but  sources tell AllThingsD that Yahoo paid  $30 million for Summly, mostly in cash, with 10 percent in stock.

At the age of 15, Nick D’Aloisio created the Summly app at his home in London. It started with an insight — that we live in a world of constant information and need new ways to simplify how we find the stories that are important to us, at a glance. Mobile devices are shifting our daily routines, and users have changed not only what, but how much information they consume. Yet most articles and web pages were formatted for browsing with mouse clicks. The ability to skim them on a phone or a tablet can be a real challenge — we want easier ways to identify what’s important to us.

Summly solves this by delivering snapshots of stories, giving you a simple and elegant way to find the news you want, faster than ever before. For publishers, the Summly technology provides a new approach to drive interest in stories and reach a generation of mobile users that want information on the go.

Summly originally started as a prototype app called Trimmit, which soon garnered attention and seed funding from Hong Kong billionaire Li Ka-Shing’s investment firm. In no time, it had a range of other investors, receiving up to $1.5 million from Ashton Kutcher, Zynga’s Mark Pincus, Automattic’s Matt Mullenweg and Airbnb’s Brian Chesky.

Summly has nearly a million users since its December 2011 launch.

Nick and the Summly team are joining Yahoo! in the coming weeks but the young Nick D’Aloisio has signed on for only 18 months.