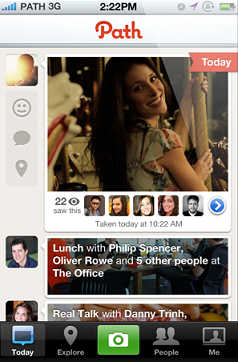 Path.com, the photo-centric service, built for smart phones, is designed to help users share information only with people they trust. But the service offers users a different experience in sharing photos with friends.

In recent weeks, the startup has added some interesting and unusual features, including 10-second video clips and simple emoticons that incorporate mood — one of the least explored frontiers of actionable metadata.

In a statement released on Path’s blog, “there have been over 2 million moments shared between close family and friends on Path.” And that number is expected to rise, since, as Morin writes, “you can now use Path to share with anyone via e-mail.”

Path has raised $8.65 million Series A led by Kleiner Perkins Caufield & Byers and Index Ventures with participation from Digital Garage Japan and First Round Capital.

Dave Morin, formerly an executive at Facebook Inc. and Apple Inc., and Shawn Fanning, co-founder of Napster, are betting that people crave more private interaction with a much smaller social circle: Path lets each user designate only 50 friends. Morin estimates that, based on Dunbar’s research, 50 is “roughly the outer boundary of our personal networks.”