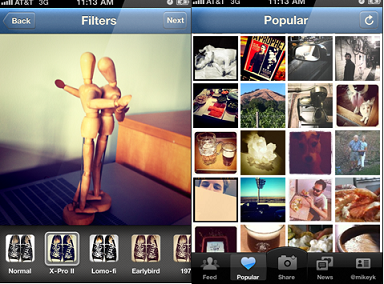 Instagram is an iPhone app that enables the user to snap a photo (or take an existing photo from the phone’s gallery), enhance it with eleven different possible effects, share it on the various social networks, as well as on Instagram itself.

Instagram was launched in October 2010 and since then the app has enjoyed immediate popularity and a huge user base. The app accounts are free of charge and allows members to snap pictures with their phones and add visual effects that give images the classic look.

In late December, Instagram announced that 1 million users had registered for the service. At the beginning of February this year Instagram attracted 1.75 million members, whom collectively upload around 290,000 photos per day.

The service hit 2 million users this week. They tweeted the milestone on Feb 14th.

The big question is, how did a photo sharing service attract 2 million users in such a short time when it took Foursquare a year to hit that mark and Twitter two years.

# Instigram is also simple and easier to register and start using.

# The introduction of a hashtags feature expanded its market segment.

# Influential friends. When Instagram first released its application in October, Dorsey, Twitter’s chairman, tweeted about it to his million-plus followers. That spread the news faster for them.

On Feb. 2, Instagram announced its first major round of funding: $7 million from Silicon Valley venture capital firm Benchmark Capital and a list of high-profile investors including Jack Dorsey, a Twitter founder, and Adam D’Angelo, co-founder of Quora.