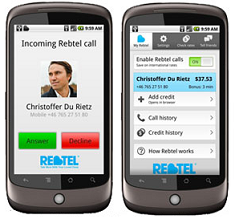 This profitable start-up has had a record breaking twelve months and increased revenues by more than 120% to $40 million in 2010. Rebtel’s figures show it is currently growing five times faster than Skype and plans to continue this trend by almost doubling its revenue to $75 million by the end of 2011 with a current run-rate of $55 million.

Rebtel has made significant strides since its inception in 2006 with over 1 billion minutes of international calls logged and a total of 200 million calls connected.

Rapid expansion into Africa, Asia and the Middle East has contributed to the increase in customer base. Free international calls to mobiles were enabled in Algeria, Bahrain and Jordan and rates have been lowered to Egypt and the above countries.