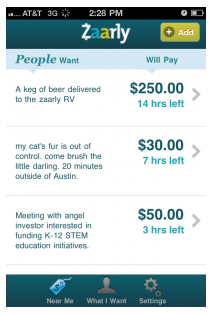 Zaarly is an auction-style startup that connects buyers and sellers in a real-time marketplace using mobile phones.

In an interview with TechCrunch’s Alexia Tsotsis, Bo Fishback co-founder of Zaarly said:

“We facilitate in-person transactions so it is hyper-local in the truest sense,” he said. “[For example] if you want to pay $50 for someone to bring you a pizza and you want it in the next 45 minutes, you post it on Zaarly and we make sure it gets as broadly syndicated as possible. People who are willing to fulfill that order for you, in that amount of time, for that amount of money, can make it happen.”

With Zaarly people who want things and people who want to provide services are brought together in an unprecedented way, with the focus on the buyer’s needs as opposed to the sellers. Buyers post what they want and how much they’re willing to pay and sellers can log in to Zaarly view the needs and prices of tasks around them. Sellers bid for the tasks, and the buyer chooses the best one, with Zaarly connecting the two via an anonymous Twilio-powered phone number.

The company has yet to officially launch the mobile app to the public, but it did go live with a beta version at South by Southwest this past weekend.