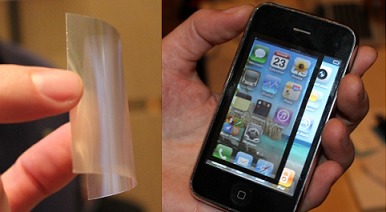 French startup Wysips has an awesome idea to bring solar energy to mobile phones. Instead of putting a large solar panel on the back of the device, they want to integrate it into a phone display in such a way that user wouldn’t even know there’s a solar panel on their phone.

The idea of this film is to capture energy from either the sun or a nearby light source (such as a lamp), convert that energy into power, and make it so your phone does not even require a large battery. A battery would still be required because the solar power just simply would not be enough to power a fully-functional smartphone.

The power coming from light would be equivalent to a trickle-charge; directly in the sunlight it would take 6 hours to completely charge a regular battery, and indoors it would take even longer than that.

The film for the phone screen is superthin at less than 100 microns, transparent, and flexible. It won’t affect the sensitivity required to touch your screen so you can still use the touchscreen as normal.

Wysips is currently working to woo OEMs, phone carriers, and mobile display companies and is confident that this technology will be ready to ship and/or integrate with phones and tablets within the next 12 months.