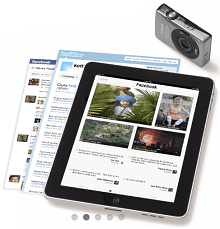 Flipboard’s Co-founder and CEO Mike McCue has confirmed the $50 million round at a $200 million valuation reported then, in a wide-ranging interview at the start-up’s Palo Alto, Calif. HQ.

Flipboard pulls information from media RSS feeds sites such as Twitter and Facebook data streams and then reassembles it in an easy-to-navigate, personalized format in a mobile tablet touchscreen environment.

“We’re obvious thrilled, because we think it confirms our focus that people want a beautifully designed way to interact with content and to share it,” he said. “And there is a lot more to come–on a scale of one to 10, we’re just at a two or three.”

“With this funding, we can grow at the right pace and have a lot of flexibility to get the product right,” said McCue. “And, that’s the most important thing.”

The bulk of the new second round of funding–Flipboard had previous raised $10.5 million–came from New York-based Insight Venture Partners.

Investors in this new round include Comcast’s venture arm, as well as previous investors, including Kleiner Perkins, Index Ventures and a spate of well known angels, such as Twitter Co-founder and product guru Jack Dorsey, Facebook Co-founder and Asana dude Dustin Moskovitz, the ubiquitous Ron Conway, actor Ashton Kutcher and the investment company of former News Corp. exec Peter Chernin.