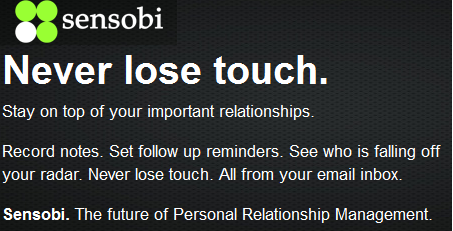 GroupMe, a New York-based start-up whose wireless applications let people create private text-messaging groups, has acquired a small application developer Sensobi as thecompany continues its expansion. Terms of the deal were not disclosed.

Sensobi cofounders Ajay Kulkarni and Andrew Cheung have joined the company, and GroupMe plans to integrate parts of Sensobi’s technology into GroupMe’s applications, first on BlackBerry, and then later on Google’s Android system and Apple’s iPhone.

The Sensobi BlackBerry app is free but there is also a paid version, which costs $10 in the BlackBerry App Store. The paid app will be made available for free in the near future, said GroupMe CEO Jared Hecht.

The app, downloaded more than 100,000 times, analyzes a user’s phone calls, emails and text message and displays a ranking of the people that a person communicates with based on the frequency of the interaction.

It also lets users to create alerts that remind them to contact a person in a certain interval of time, say, every week or once a month. Mr. Kulkarni said GroupMe will integrate the Sensobi ranking and alert technology into its apps