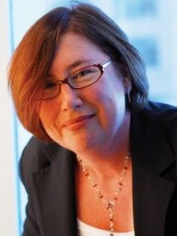 Eileen Gittins is the founder and CEO at Blurb, the creative publishing and marketing platform that enables anyone to design, publish, market and sell professional-quality books.

The second piece of advice I give to entrepreneurs is – they’re so focused on what they’re doing, and understandably so, that they’re ill equipped to answer the question on how are you differentiated out in the market place.

I think there’s a real tendency to be so focused on how do we make ours great that you’re not as clear on how is yours different than these other guys and who is that competition, and instead of being defensive about the competition, really being proactive about that.

If there is an 800 pound gorilla in the room, you know, if Apple is going to be your competitor or Facebook or Google or Zynga you better have a good story for why that is.

The next thing that I tell people is, their value proposition to the customer is not crisp. If you can’t get it down to a sentence and you’re still struggling, then you’re not ready. You can always change – listen,
things change all the time so I’m not saying it stays exactly the same statement for the rest of your life but going in, you have to have really thought deeply about that.

There’s no energy around that space so maybe it’s not a good investment area. So you actually want there to be competition. That’s a good thing; you just have to be able to clearly describe how you’re going to kill it.

Further, I’m not a big fan of a 40 page PowerPoint slide deck. I’m a much bigger fan of maybe having three to four slides that are structural, like here’s the slide on, the team. What’s our story, why we’re passionate
about this thing, why we’re not going to give up until we get this thing off the ground, where we’ve been before etc. But I wouldn’t do 12 slides on that.

There would be one. And then there would be one slide on the value proposition. There would be a statement and then I would just talk about the target market. So I would just use three or four slides to tell a story. I think people can get a much better sense of who we are as people and that at the end of the day, I think people do want to do business with people that they believe are articulate and who understand their business and that they can string a sentence together, because in a way you’re talking in that environment to them is a proxy for how you’re going to be talking to the customers they hope you’re going to get.

But when people ask me what do I think and they come to meet with me, I’ll say, if you can’t tell me the entire opportunity of your business in ten slides or less, you don’t know your business yet.
Taken from Startup Best Practices