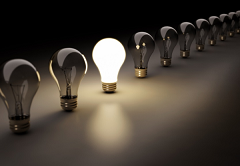 In the words of Apple: “There’s an app for everything”. 2011 witnessed yet another growth in the mobile industry. A lot of startups released iPhone and Android versions of their products and services. There were lots of innovation in especially the mobile payment market in 2011. With the proliferation of smartphones and tablets, 2012 will still record high numbers of mobile apps.

Pinterest: Pinterest a Palo Alto-based startup, is quietly becoming one of the most-trafficked social networking sites on the web. Pinterest lets you organize and share all the beautiful things you find on the web. People use pinboards to plan their weddings, decorate their homes, and organize their favorite recipes. Pinterest has raised more than $37 million in funding.

AirBnB: Founded in August 2008, Airbnb is a community marketplace for people to list, discover, and book unique spaces around the world online or from an iPhone device. Airbnb lets you rent someone else’s apartment or rent out your apartment while traveling. In July 2011, the company raised $112 million at a $1 billion valuation.

Square: Square is a service that enables anyone to accept credit cards anywhere. Square offers an easy to use, free credit card reader that plugs into a phone or iPad. Square founder Jack Dorsey has announced that the service now serves over 1 million merchants who have processed a transaction are signed up and ready to process transactions.

Klout: Klout provides social media analytics to measure a user’s influence across their social network. The analysis is done on data taken from sites such as Twitter and Facebook and measures the size of a person’s network, the content created, and how other people interact with that content. Klout identifies influencers and provides tools for influencers to monitor their influence. Klout invited 217 influencers with high Klout scores in design, luxury, tech and autos to test-drive the new Audi A8. These influencers sparked 3,500 tweets, reaching over 3.1 million people in less than 30 days – a multiplier effect of over 14,000x.

Turntable.fm: Turntable.fm is a social music platform that encourages hanging out with people and discovering music. If a DJ is playing a song you like, you can add it to your playlist, buy it on iTunes, find it on Last.fm, or launch Spotify.The service opened to the public in May 2011, and by late June had already reached 140,000 active users.

Dropbox: Dropbox is a free service that lets you bring your photos, docs, and videos anywhere and share them easily. It is a folder that syncs to the Internet, and allows for super easy file sharing between users. As of April 2011, Dropbox had more than 25 million users. Dropbox’s annual revenue is expected to reach $240 million by close of 2011.

Flipboard: Flipboard is a digital social magazine that aggregates web links from your social circle, i.e. Twitter and Facebook, and displays the content in magazine form on an iPad. As of September 2011 Flipboard recorded 3.5 million downloads, 550 Million Flips Per Month.

GroupMe: GroupMe is a group messaging and conference calling service that lets you stay in touch with groups of people via mobile phones. It’s a free service that allows users to create and manage groups that, in effect, create an SMS-based chatroom. GroupMe was sending one million texts every day as of February 2011. GroupMe was founded in 2010 and acquired by Skype in Auguest 2011.

Quora: Quora aggregates questions and answers to topics and allows users to collaborate on them by editing questions and suggesting edits to other users’ answers. Quora is a continually improving collection of questions and answers created, edited, and organized by everyone who uses it. Quora had half a million users in January 2011. The company’s valuation was more than 1 billion dollars in 2011. Quora has reportedly turned down several billion dollar acquisition offers, as reported by Business Insider.