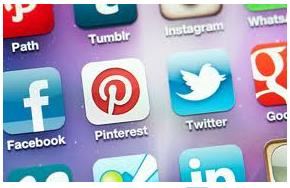 Internet usage is growing at a phenomenal rate across all continents. The interesting revealation is that a lot more people are gradually shifting internet access from laptops to portable mobile devices (smartphones and tablets). Popular among sites accessed are social sites. EMarketer predicts there will be a whopping 1.43 billion social network users in 2012, representing a 19.2 percent increase over 2011 figures. This figure could just be the beginning. With the increase in smartphone and tablet usage among internet consumers, the numbers are bound to grow at an amazing rate. Social media is here to stay.This offers opportunities for small businesses and companies that are targeting internet consumers.

Facebook is now a public company and a few social services including the fastest growing social network Pinterest could go public in the future as well. Millions of people are now very confident to share personal images and data online with friends and even strangers. Klout, a social platform on authority of digital influence attempts to to help individuals and businesses figure out how influential they are in their social space.

Businesses are beginning to treat social channels more like communication platforms. Social media has become an integral part of customer support. Businesses are now listening and taking feedback from the millions of their prospective customers and customers on social media sites. “While seniors are testing the waters, many Baby Boomers are beginning to make a trip to the social media pool part of their daily routine.” said Senior Research Specialist and report co-author Mary Madden.

Now some social media facts:
-Twitter encountered 16,000 tweets per second in January 2012, almost doubling that of the start of 2011.
-Users spend a total of 6.7 billion hours on social networks towards the close of 2011.
-82% of the worlds online population are using social media networks, boasting 1.2 billion users.
-In December 2011 Pinterest became one of the top 10 largest social networks with 11 million visits per week.
– Youtube records 2 billion views per day.
– Over 250 million photos are uploaded to Facebook every day.