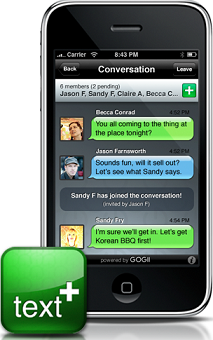 The app topped hundreds of thousands of mobile applications to take the #36 spot on Apple’s list of the all time most popular free iTunes apps. textPlus was the only social text messaging app to appear in the top forty.

textPlus has turned group texting into a social phenomenon through its highly popular topic-driven texting Communities, as well as the app’s “search” feature, which help users find one another and connect in the app.

Photo sharing has proven popular as well, with Face Text allowing users to take and send new photos with each press of the “send” button.

textPlus launched in 2009. Its network includes smartphones and feature phones to span over 34 million users. Available on all iDevices and Android phones, textPlus has been downloaded 12.5 million times, has sent over 6 billion messages and adds on average about 70 thousand new users per day.

Available on the Appstore

textPlus is a product of GOGII. GOGII currently provides customers with text messaging through its flagship product, textPlus