HealthTap, health Q&A startup has announced that it has closed $11.5 million in its first round of funding after its $2.5 million angel round this past March. HealthTap is an Interactive Health Network that wants to improve your health and well-being. They personalize health information for you and provide free online and mobile answers from thousands of the best physicians in the U.S.

The recent round was led by Mayfield Fund, Mohr Davidow Ventures and Eric Schmidt’s Innovation Endeavors. HealthTap will use the Series A funds to accelerate growth, recruit top talent, and engage more physicians and patients.

HealthTap, which has mobile apps for consumers and doctors, routes your questions to the appropriate doctors who have expertise on the particular subjects of the questions. Then doctors can choose to answer the questions. Doctors, unlike consumers, are not anonymous on HealthTap. Doctors can build up reputation through answering questions and ultimately drive patients to their offline real-world practices.

HealthTap helps you better understand your health, make better health decisions, and find the best doctors. They also help physicians better serve existing patients, find new ones, and build their reputation by demonstrating their expertise online. Over 6,000 physicians and 500 health care groups have already signed up with the HealthTap. 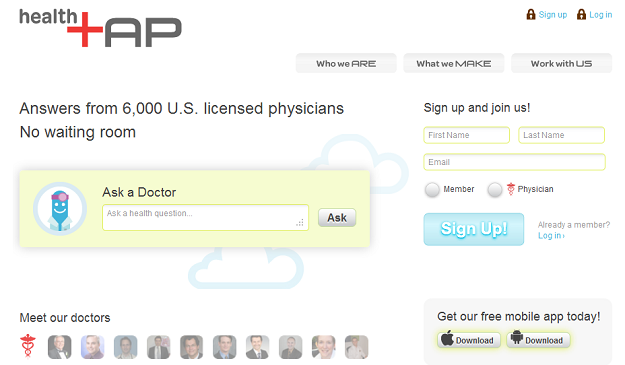